The world is in continuous movement, opportunities and needs arise. APDI Group works to keep its partners and members up to date.

If you have any doubts or need information or analysis, we are at your disposal to support and inform you. 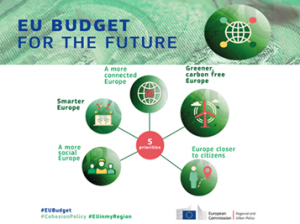 Multi-annual Financial Framework 2021-2027; An Overview of Development, Growth and Recovery.

The European Union has its own budget, called the Multiannual Financial Framework (MFF), which is valid for six years and is used to develop the programmes and projects promoted and financed by the EU, as well as its own operations.

Although the period of implementation of the MFP 2014-2020 was marked by the economic recovery from the economic crisis that began in 2008 and the fight against climate change, during this six-year period facts and realities have come together such as the awareness of a genuine green policy, economic and social digitalization and facts such as the UK's exit from the EU (Brexit).

With all this in mind, an MFP 2021-2027 was on the horizon, marked by the need to support the Green Economy and Society, the digitisation of Europe and adaptation to an EU-27 that was losing one of its G20 members.

But the year 2020 brought a pandemic, the Covid19 , which has put the capacities and resources of the health, economic, political and social systems of the World and EU countries to the limit. The EU, within the coordinated measures and reactions it has developed The EU has opted to reinforce and strengthen the member countries with a 2021-2027 MFF which, despite having 27 countries instead of 28, is growing with a budget of around 1.09 billion euros 2021-2027 and to which 750 billion euros will be added for the period 2021-2023 within the so-called Next Generation EU programme, a programme that will strengthen the countries most affected and hit by the Covid19 for their economic and social recovery.

This MFP will be marked by a strengthening not only of the economy, but also of the operation and philosophy. It will be simpler and more transparent, with less bureaucracy, greater flexibility and agility and seeking more concrete results that stand out for their effectiveness and efficiency. All of this will be marked by greater European added value through support and strengthening, for example, the empowerment of young people, the strengthening of SMEs or the Digital Economy.

The outcome of this MFF 2021-2027 is reflected in the Cohesion Policy 2021-2027 and should lead to a smarter, greener, low-carbon, more connected, more social and closer to its citizens.

The figures of this MFP and its allocation to the different European programmes open up a range of opportunities and possibilities for both public and private entities, including non-profit organisations, to see their activities and expectations of growth, development or internationalisation reinforced, as these programmes will support and finance activities such as the strengthening of the digitalisation of administrations and companies, the strengthening of the European Common Market and the internationalisation of SMEs or social integration promoted by NGOs and local administrations.

All this will be reinforced by the Next Generation EU, which in the case of Spain, will represent 140,000 million euros until 2026, of which 72,000 million in transfers during the first three years. Of these, 27,000 million are already advanced in the 2021 Budget and will be used for investments and actions in areas such as the fight against Climate Change, digitalization, equality or social and territorial cohesion.

The MFP 2021-2027 and the Next Generation EU provide a great opportunity. APDI Group and its partners and collaborators are working to support and encourage this opportunity to be as profitable as possible for the public and private sectors. With the support and involvement of our work teams, we support the development of work and coordination strategies that allow municipalities, SMEs, NGOs or foundations to focus their efforts and maximize their resources and achieve their goals with the support of these opportunities provided by the EU.

For any doubt or need for information or analysis, we are at your disposal to support and inform you. Contact us and we will assist you and support you in whatever you need